Do we remember our experiences from when we were an egg or a sperm? 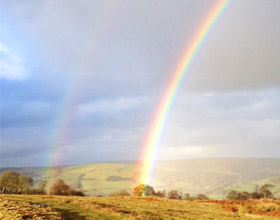 It’s an interesting but distressing fact that conventional medical practice does not recognize the possibility that an unborn baby can experience pain. Up until recently, surgery done on the in-utero foetus, was performed without anesthetic. It was believed that unborn babies cannot feel pain because the nervous system is not fully developed. Pioneering research conducted over the last 20 years suggests that actually babies are very conscious of what is happening to them in the womb and deeply affected by painful and traumatic experience.

Anecdotal reports and video evidence of babies undergoing amniocentesis showed them moving away from the needle inserted into the uterus, or batting it away. Further research suggests that babies are both aware, and that they remember experiences in the womb. Graham Farrant, an Australian doctor, discovered that he re-experienced his uterine existence as cellular memories. RD Laing and Frank Lake, both psychologists, contend that memory exists at a cellular level, from the earliest moments of our life in the womb. Lake also said that the first trimester of uterine development is the most formative for us, emotionally and psychologically. Research over the past five years, including by Bruce Lipton, shows that memory can be encoded biochemically in cells.

Within this context, Karlton Terry’s work then is not so surprising. Over a 20 year period, inspired by the research of Dr William Emerson on pre-natal development, trauma and its resolution, Karlton Terry has trained practitioners to recognize such pre-natal trauma and to effectively re-pattern it, so that it no longer undermines adult behavior. Through the experiences of thousands of regressees he has identified that trauma can occur at the stage of being a sperm or an egg, or later at conception or implantation in the womb; as well as at different developmental stages in the first and subsequent trimesters and finally at birth itself.

Research by William Emerson suggests that traumas that occur at an earlier stage can act as a template for later experience. They can be re-enforced by other later events and have a life long impact upon the adult with emotional and psychological repercussions. One baby that was stuck in the birth canal, later as a young child was locked in a cupboard by accident. This childhood event acted as a re-enforcement to the first experience and resulted in the child developing claustrophobia. Much research has been done by regressive techniques which can access the cellular memories in adults. It’s been found that babies that experience near death at the stage of implanting in their mother’s womb, can also experience birth as being annihilative, and will later experience stressful events in adult life in the same context. Babies who experience violence or aggression within the womb, may experience birth as violent and aggressive, even though they may have loving and supportive parents

Frank Lake discovered that fetuses experience their mother’s emotions as they are passed to them as chemicals called catecholamines, through the umbilical cord.. The uterine environment can become very toxic from negative emotions together with pollutants such a as alcohol and drugs. Such experiences can be a template for later conditions of abdominal pain. Karlton Terry describes this as ‘umbilical affect’.

Working personally with clients I have witnessed sexual abuse issues relating back to a feeling a being raped at the point of conception. This particular person had accessed their cellular memory of identifying themselves as the egg just prior to fertilization by the sperm. The sperm was perceived to be aggressive and attacking. Another client struggled with a sense of being worthless; endlessly giving and over-extending herself for others, yet not feeling that she was worthy to receive either love or attention. She identified this psychological state as being rooted in her ‘survivors guilt’, as the sperm that had made it to the egg, whilst millions of other sperm died. Karlton describes this stage of pre conception as The Holocaust, in his book ‘The Sperm Journey’. Someone else that I worked with who suffered ongoing abdominal pain was able to access the memory of his umbilical cord being cut, causing tremendous pain and suffering, From that memory, he then regressed further to the stage of being a sperm as it was losing his tail at the point of conception. He experienced this as being an agonizing death.

It is possible to heal from these early traumas, using regressive and re-patterning techniques developed by Karlton Terry and Dr William Emerson.
Karlton has also pioneered ground breaking work with healing pre-natal trauma in babies, through his deep empathic understanding of their suffering. He is able to interpret their body language and hand gestures as a means of them explaining to him what they suffered in the uterine experiences. He has had some stunning results at his baby clinics. One baby that had been born by caesarian section could not crawl. He had been receiving physiotherapy on a daily basis for many months without success. After one re-patterning session with Karlton, he was able to crawl.

A baby born, deeply in shock from his or her pre-natal or birth trauma, may have extreme difficulty bonding with mother.The fact that adults don’t recognize the possibility of this trauma, leaves the baby feeling very disconnected and isolated, thereby causing a deeper distrust and feeling of aloneness. Studies have identified violence and aggression in adults as being caused by impaired bonding and early trauma.

If we are to heal our society and reduce the amount of physical and mental illness, then it is important to acknowledge the depth of suffering that we undergo as pre-nates. Deeply empathic understanding can go a long way towards healing this. Furthermore, early trauma can be treated using the regressive and re-patterning work pioneered by Karlton Terry and practiced by myself and other practitioners who have trained with him. If you are interested in exploring these themes further you may want to attend the Healing Birth Wounds Workshop which is happening soon on the 27th & 28th September.